Arizona Bark Scorpions are Out of Hibernation 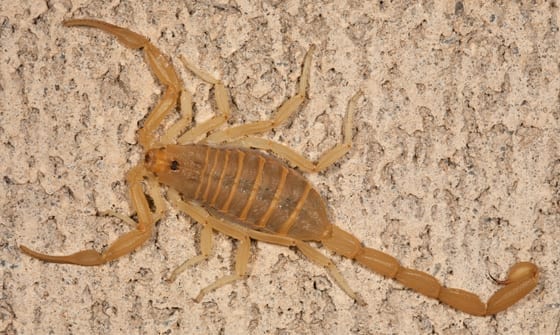 The Arizona Bark Scorpion’s notoriety is due to the danger it represents for humans, and with the temperatures warming up they are coming out of hibernation, typically when overnight averages begin to exceed 60 degrees regularly.

An adult Bark Scorpion usually has a length of 2.7-3.1 inches, with males being larger than females. They are yellow with marked horizontal lines in the back; the tail is thin with a stinger that has a very pronounced curvature.

Bark Scorpions are stealthy predators with very fast and efficient movements, and although they appear to be less harmful than black and large scorpions, they have one of the higher levels of toxicity in their venom.

Like all other scorpions, they have fine hairs all over their body which they use to recognize the terrain and detect their prey and threats. They have eight articulated legs and thin, but firm, pedipalps (pincers) which they use to hold their victims.

Being nocturnal creatures, scorpions ambush their victims. They feed on small and medium insects like beetles, spiders, crickets, cockroaches and other scorpions.

Why You Need to Rid Your Property of Bark Scorpions

The potency of most types of scorpion stings are about the equivalence of a bee sting. However, the venom of a Bark Scorpion is much more severe with very intense pain accompanied by hot burning sensation.

In some cases its sting can become substantially more serious, causing breathing difficulty, numbness, vomiting, and even convulsions. Difficulty swallowing is usually a sign of an allergic reaction. When the above symptoms are present, victims must seek emergency medical care for scorpion stings where anti-venom is available.

The most vulnerable are infants, young children, the elderly and those with compromised immunity in poor health. Domestic pets are also vulnerable.

Bug Guardian can help you fight these pests with our professional Scorpion Home Seal service.