Look out For Scorpions This Halloween in the Valley 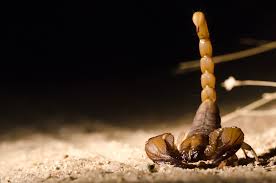 While you and your family are out Trick or Treating this Halloween in Arizona make sure to keep an eye out for Scorpions. While the temperatures in the Valley are slowly dropping they are still warm enough that Scorpions are out.

Arizona Bark Scorpions are at home in the desert and can usually be found near rocks, hiding under them or in crevices. However, these scorpions are also able to climb, so they will sometimes take refuge in trees or on rock walls. Bark Scorpions have also been found in people front yard’s and walls.

At night Scorpions can be difficult to see especially while you are keeping an eye out for your trick or treaters. It is best to avoid areas with new construction as you are more likely to see them in these neighborhoods.

If you are stung by an Arizona Bark Scorpion, seek medical attention immediately. Severe reactions to stings may require antivenin, which a doctor can administer. Expect pain and swelling at the site of the sting, and avoid drinking alcohol or taking any sedatives if you have been stung. An ice pack can also be applied to help ease the discomfort.