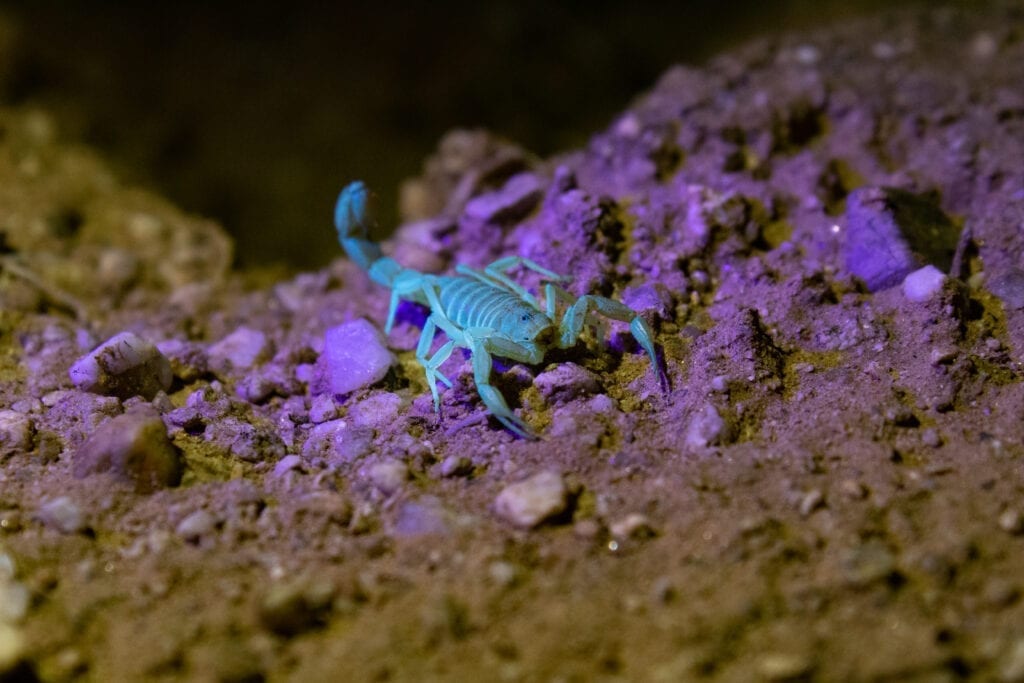 Why do Scorpions Glow in the Dark?

Most scorpions glow in the dark and display fluoresce under ultraviolet light, like is found in typical black lights. This is because of a substance found in the hyaline layer of a scorpion, which resides within a scorpion’s exoskeleton, called the cuticle.  This is what makes scorpions glow. Why scorpions have this trait is something we can only theorize on.

The hyaline layer of the scorpion’s exoskeleton is extremely durable, capable of surviving millions of years, and can often be found in fossil specimens, and it will continue to display fluorescence. Amazingly, scorpions preserved in alcohol can leach the substance into the alcohol, causing that to glow as well. Much like the scorpion in general, it’s pretty strong stuff.

Scorpions shed their shells from time to time as they outgrow their protective coverings  This process is called molting, and results in a softer exoskeleton which hardens over time.  Only when this hardening process begins does the fluorescence from it’s hardening cuticle form, typically after a few days.

There are several theories as to why scorpions have developed this trademark glow, including helping them find other scorpions, throwing off potential predators, and even protecting them from the sunlight (UV rays). They are nocturnal by nature, avoiding the sun and even UV light provided by the moon.  In this sense, they may be using this fluorescence producing layer to identify incoming light they wish to avoid and remain out of the sun. However, this phenomenon has not been studied enough to yield any concrete answers.

In one study conducted by Carl Kloock from the California State University in Bakersfield1, he found scorpions could use this fluorescence to their advantage by allowing them to detect UV light and react by reducing activity. In the open desert, this could allow them to recognize when they are exposed to light, giving them a heads up to take cover before being noticed by a predator. Interestingly, this theory is supported by the fact scorpions seem to have only one light detecting pigment in their eyes, which detects the same blue-green their fluorescence emits.

How it Helps Us

This phenomenon, although not fully understood, does serve as an advantage to humans. We can use UV detecting black lights in order to track movements, diagnose hot spots, or locate in order to remove scorpions from a home or business. This is also useful for camping or exploring the desert at night, as we could detect scorpion prone areas or direct contact.  Those wishing to study scorpions take full advantage of this fact, which can help them easily detect the animal in the field.