Wolf spiders are found virtually all over the world, apart from the Arctic and Antarctic Circles. Brown recluse spiders, on the other hand, are only found in southeastern North America.

While living in Arizona you don’t have to worry about brown recluse spiders, though local and easily terminable infestations of the spider have been found.

Brown Recluse: The Violin on the Neck 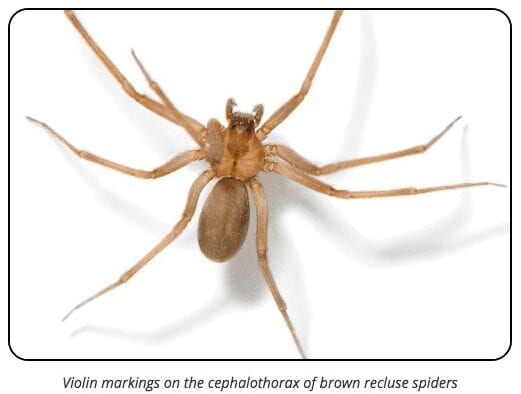 Though other species of spiders (particularly cellar spiders and pirate spiders) have similar markings, it is one of the many traits that can help identify a brown recluse spider, since it clearly differs from the other two types of spiders in superficial visual characteristics. As far as their comparison with wolf spiders goes, the latter don’t have any such markings.

Both brown recluse and wolf spiders have contrasting and peculiar arrangements of eyes, which can be used to identify them.

All spiders, being arthropods, have 8 legs. However, the individual design of their legs varies massively between species. In this case, wolf spiders have stockier legs with spines. In contrast, the brown recluse spider’s legs are much more slender, and don’t have spines. Instead, they are often covered in fine hair.

The color of various individuals of both types may vary, but there is one important identifying factor. The brown recluse spider always has a uniformly-colored abdomen, while the wolf spider’s abdomen has patches and lines in different colors.

Armed with these tips, you should now have no trouble in distinguishing between these two confusing species of arachnids. Remember: Wolf spiders―the spiny-legged, multicolored, eight-eyed, non-violin-marked ones―are perfectly safe for humans, while brown recluse spiders―the hairy-legged, uniformly colored, six-eyed, violin-marked ones―can cause serious injuries, and should be kept at arm’s length.