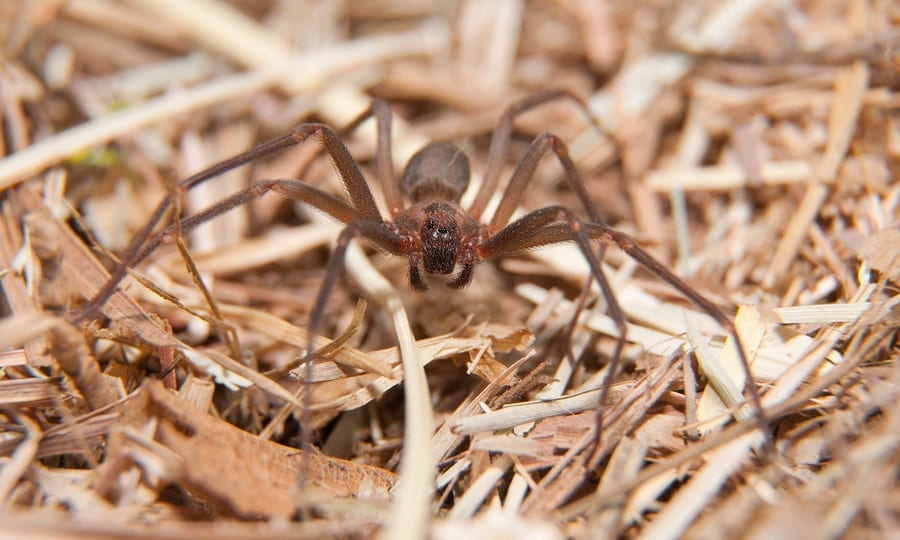 Brown recluse spiders are tan to dark brown in color, and between 1/4 and 3/4 inches long. Like all spiders, they have eight legs and a round body. Most brown recluse spiders also have a darker, violin-shaped marking on their dorsum. They are found in the Central Midwest, from Ohio to Nebraska and south through Texas and Georgia.

Brown recluse spiders feed on small live prey such as insects. Outside, brown recluse spiders are typically found around rocks, utility boxes and woodpiles or under bark. Indoors, they can be found in any undisturbed area, such as inside boxes, among papers, in seldom-used clothing and shoes, under furniture, or in crevices such as baseboards and window moldings. Closets, attics, crawl spaces and basements are the most common hiding areas.

Brown recluse spiders are not aggressive by nature, and typically run for cover when disturbed. However, these spiders are known to bite when they feel trapped. In many cases, a person is bit when they unknowingly disturb a brown recluse, for example, while moving storage boxes in a basement or putting on a piece of clothing that has a spider hiding in it.

Both female and male brown recluse spiders can bite and inject venom, making them a danger to humans. The bite is usually not felt, but results in a stinging sensation, followed by intense pain that develops as long as six to eight hours later. A small blister usually develops at the bite location, and the surrounding area may become swollen. Dead tissue around the bite may peel away leading to a deep, open ulcer that can take three or more weeks to heal, resulting in dense scar tissue. Restlessness, fever and difficulty sleeping are common symptoms.

The venom injected during a bite can lead to a severe allergic reaction, especially in children, the elderly and those with preexisting medical conditions. If you suspect you or a family member has been bitten by a brown recluse spider, it is important to seek medical attention promptly.  There is no anti-venom available in the United States to counteract the poisonous venom of the brown recluse spider bite, but a doctor may prescribe pain medication and antibiotics to keep the bite from becoming infected. In severe cases, plastic surgery may be required to rectify scaring.

So what can you do to prevent brown recluse spiders from taking up residence in your home? To begin, inspect the outside of your home for any small openings or holes, paying special attention to areas where utility pipes enter the home. Seal any such openings with a silicone caulk to prevent spiders and other insects from gaining access inside.

If you notice a Brown Recluse or have feel as though you have an infestation in your Phoenix property, please call Bug Guardian for spider removal at (480)345-2847.