March 15, 2017 admin Pest Control Services and Announcements No comments yet 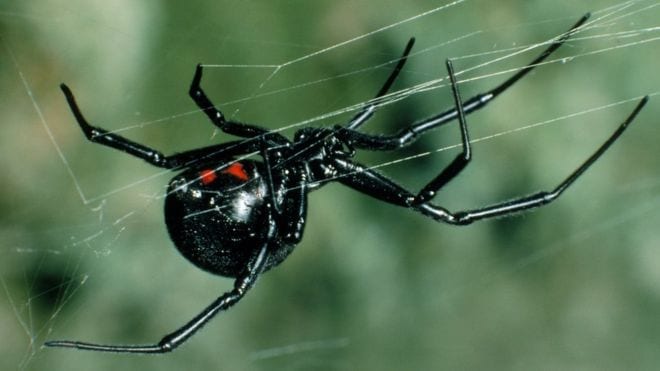 You’ve probably heard of the infamous black widow spider and the fact that they live in our great cities of Chandler, Gilbert and Queen Creek. However, did you know that they are considered one of the most venomous spiders in North America? With these credentials it’s hard not to stomp on any spider you see but you may not have to. There are many true and false statements surrounding black widows so we’ve got a few tips to keep you from running any time you see a black spider.

Myth: Black widows are aggressive towards humans and pets

Fact: Scientists recently completed a study on animal behavior to test the outcome when black widows were poked versus when they were pinched. The findings show that these fierce sounding spiders are actually quite shy and only bite if really provoked. So only when the spiders feel truly threatened by a predator or say, accidentally being stepped on by a human, will the black widow try to bite. To help avoid threatening these little spiders, it is always a good idea to be careful where you step, wear gloves and close-toed shoes when working in garages or sheds. Also, be sure to wash all produce before consumption. It’s not common but black widows can accidentally come home in fruit from the grocery store as there were two reports of that occurring earlier this year.

Fact: Before the creation of antivenin, black widow bites were recorded as being fatal about five percent of the time but now they are rarely fatal to humans. According to statistics from Poison Control Centers, 23,000 black widow bites were reported between 2000-2008 but no one died from any of those bites. As long as you seek medical care after a spider bite, then proper procedures can be taken to ensure there are no fatal consequences. This is especially important for the elderly, immunocompromised and young children as their reactions could be more severe.

Myth: Black widows only like to spin their webs outside.

Fact: Although black widows would happily make their home in a woodpile, these spiders like to set up shop in any dark, secluded area. So that could mean closets, basements, corners of garages, cluttered areas or behind your favorite chair that has never been moved. Identifying traits of a black widow are their black, shiny color with the signature red hour-glass shape on their abdomen and they make messy webs that often have no pattern. To avoid being hospitable to black widows be sure to vacuum and clean all areas inside your home on a regular basis, especially dark corners or behind furniture that isn’t moved very often. Also, keeping your home free from other pests which are the spiders’ food source will help deter them. Take a look at our tips for black widow control and prevention and with regular pest control you should be able to keep your home free from these pests.
Now that you have some of the truths about black widows we hope you make the important decision to call a professional pest control company if you see these spiders. We travel throughout the Valley, including Queen Creek, Chandler, Mesa and Gilbert so don’t hesitate to contact us today!

March 8, 2017 admin Pest Control Services and Announcements No comments yet

Spring is when most of us are likely to take a hike up a mountain, walk down a nature trail, catch some fish in a river, cook a hotdog on a stick over an open campfire, eat a marshmallow, watch the sunset, swim in a lake, have a gathering in the backyard, mow your lawn, and swat a mosquito. In fact, you’re likely to do that last one while doing all the others; but there are some ways to prevent bites this summer.

Top Tips for Preventing Mosquito Bites in Order of Effectiveness

Mosquitoes are an inevitable part of summer, and these pests can be more than just an annoyance. They can carry many viruses that have severe symptoms. Protect yourself when you go out and consider mosquito services from a trusted pest control specialist like Bug Guardian Pest Prevention to reduce mosquitoes in your backyard. Fewer mosquitoes mean fewer bites. And fewer mosquito bites makes summer better.

Signs of Fleas in Tempe Arizona

March 1, 2017 admin Pest Control Services and Announcements No comments yet

Signs of Fleas in Tempe Arizona

Many signs can indicate flea activity.  A common indication would be pets that repeatedly scratch and groom themselves. This is caused by the discomfort of the flea activity as the adult fleas feed on the pet’s blood. People also may experience bites which leave behind itchy bite marks (a medical doctor can be consulted, since there are other sources of skin irritation beside fleas). Flea dirt, the adult flea feces, also can indicate activity. Flea dirt looks similar to coarse ground black pepper and may be seen in pet beds, carpets, rugs and other areas where the animal host rests.

Fleas depend on a blood meal from a host to survive, so most fleas are introduced into the home via pets or other mammal hosts. On some occasions, fleas may become an inside problem when the host they previously fed on is no longer around. Then fleas focus their feeding activity on other hosts that reside inside the home. An example of such a situation is when a mouse inside the home is trapped and removed, the fleas that previously fed on the mouse are then forced to feed on pets or people.

Get Rid of Fleas: Flea Control

Flea infestations require multifaceted treatment plans. Addressing only a pet’s infestation or individual flea bites will not prove effective for ridding your home of fleas. Effective flea control should encompass both chemical and physical methods and should be conducted on your pet as well as inside and outside of your home. Contact a Bug Guardian Pest Prevention today.