How To Tell If You Have Scorpions 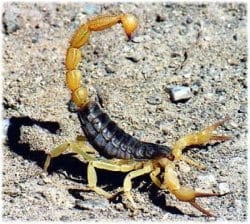 Scorpions are a distinctive and well-recognized group of arachnids. They are most easily distinguished by their lobster like appearance, but especially by their fleshy “tail” that terminates in a bulbous sack and prominent stinger. The larger front pincers are used to capture and hold prey while feeding. the stinger is used to subdue prey and for defense.

When exposed to ultraviolet light (UV or black light),  scorpions fluoresce a light yellow green color. When they fluoresce  they may be easily spotted for capture, physical killed or sprayed with an insecticide from several yards away.

During dry weather, scorpions are attracted to moisture. Because of this habit, they may be trapped by spreading wear burlap bags and collecting the scorpions during the day. Scorpions are discouraged from areas around homes by removing potential cover, such as stones, lumber, and other debris. Sealing entrances into homes can also exclude them. Applications of residual insecticides can increase scorpion control. Applications should be directed to harborages, such as stone piles. It is not necessary to treat lawns. Exterior foundation treatments every month with a pesticide directed to scorpions will provide control

While it may not be possible to achieve full elimination of a scorpion infestation in your area with this method, a preventative monthly maintenance plan, along with Bug Guardian’s service guarantee can make a world of difference in your goal of pest free living.