The Best Bee Removal In Phoenix!

Bug Guardian’s trained professionals use state of the art equipment to identify and remove bees in Phoenix. Bee removal can be extremely dangerous to property owners without proper protection and experience, posing an attack risk to people and animals in the area. Our highly skilled technicians can safely remove the entire colony and honeycomb, reducing the chance for future infestations! 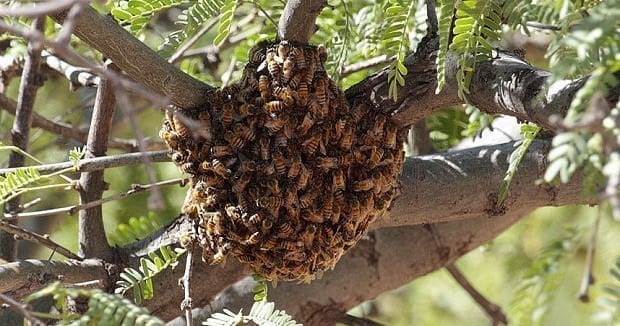 Bee swarms happen in Arizona, and thousands can arrive at your property within a few minutes, posing a serious danger to your family and neighbors. A typical swarm will involve 10,000-20,000 bees. Bee swarms may attack people and pets, and anyone with a severe bee allergy can have a potentially fatal reaction. Bee swarms are typically temporary as they scout out a new place to nest. However, if the swarm sticks around after 24-48 hours, they may have chosen your property to call home. If they are endangering people or animals, you should call immediately to have it removed.

Bee colonies can also cause structural damage, invading damage to eaves, sheds, BBQs, hot tubs, architectural features, and other hollow voids where they build out their honeycomb. These hives can lead to further issues as they may melt in the Arizona heat, causing damage to drywall and stucco, as well as attracting ants, roaches, or other insects to feed. As such, growing bee colonies need to be addressed immediately before they grow out of hand.

Africanized bees are found in the valley and can pose an even greater threat. The Phoenix area has become a hot spot for Africanized bee activity, and it has been increasing over the years. They may look like domestic bees, but are far more aggressive. Bees, in general, are more likely to attack during a swarm or in defense of their hive. Africanized bees are more sensitive and react more readily to noises and potential threats, increasing the likelihood of an attack. Africanized bees also swarm more often than the more docile European bees, swarming up to 4 times a year or more, further adding to the potential for an attack.

Bug Guardian Services
All of Phoenix!

For Immediate Help Call
Us Now!

Africanized honey bees can pose as a legitimate threat to residents of the Phoenix area. They are aggressive and can prove deadly. Call a professional immediately if you discover a colony at your home or office.

Removal of the Bee Colony

Three methods of control are used to guarantee results: aerosols, liquids, and dusting treatments flush out and eliminate the colony, preventing future infestations in the Phoenix area. Treatments come with a 100% satisfaction guarantee.

Removal of the Honeycomb

To prevent future bee infestation in your Phoenix home or office, Bug Guardian removes the honeycomb. Honeycombs that are treated but not removed carry pheromone scents. These scents attract future colonies once the pesticides break down, making their removal the key to stopping future infestation.

All of our technicians are trained and certified

All pest controls products are EPA certified and safe to use around your family and pets.

Issued by the Office of Pest Management: Business License Number: 8947