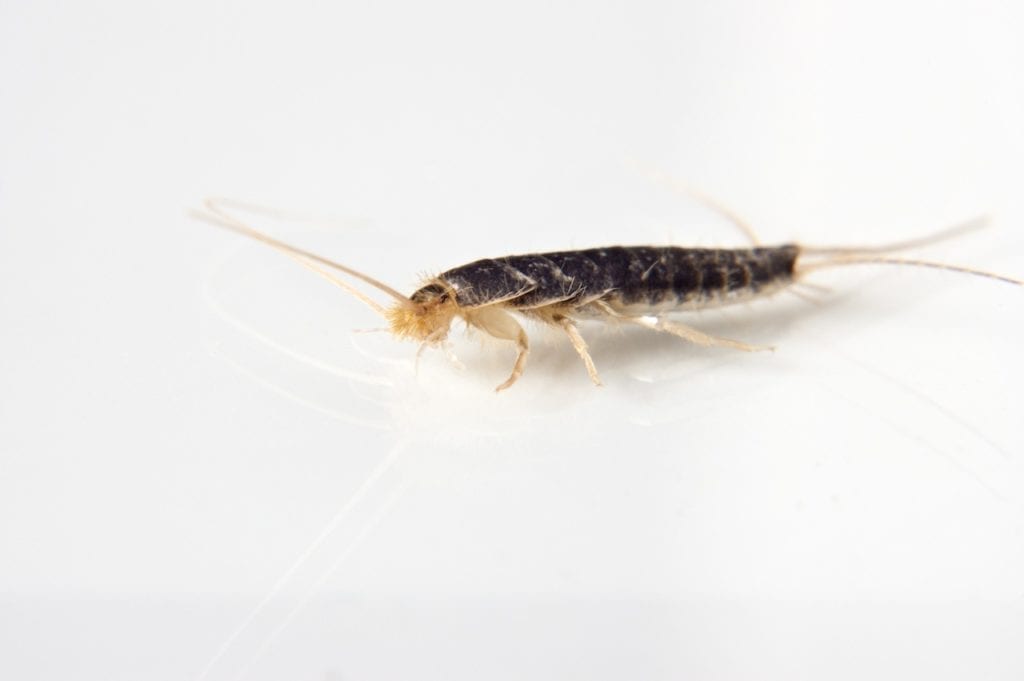 Have you ever walked into your bathroom late at night, switched on the lights and been surprised at a small insect squirming away to hide in the cracks behind your sink? Maybe it wiggled away in such a flash, you couldn’t even get a good look at it. Well, you probably just saw a silverfish.

Silverfish, otherwise known as fishmoth, are nocturnal insects that are known to take up residence in damp areas. These small pests tend to grow up to 1 inch long and have a long pair of antennae on one end of their bodies with three long appendages called cerci at the other. The silverfish gets its name due to its silvery shine that adults have, along with the wriggling motion that resembles that of a fish. Although silverfish can live in a wide range of environments, they prefer warm, moist areas. They are usually found in bathrooms, laundry rooms and kitchens. They will be most likely to be found in boxes, shelves, behind walls or wallpaper, in or under sinks, in closets, in bathtubs and even in window or door frames. Adult silverfish can lay up to 50 eggs at a time and have a very long lifespan for an insect – although there’s some disagreement about how long; different sources say silverfish live from two years up to eight years.

Why Are Silverfish Pests?

Although not particularly harmful to humans or buildings, silverfish can cause serious nuisance at times. According to the Insect Identification Laboratory, silverfish prefer vegetable matter with a high carbohydrate and protein content, usually found in starches and adhesives. As a result, they are known to cause damage to book bindings, paper, photos, carpets, wallpaper and even some synthetic fabrics, leading to their damage or destruction. They also eat a number of household foods, such as sugar and coffee, causing contamination.

How to Prevent a Silverfish Infestation

One of the ways to prevent silverfish is to remove the elements that encourage them to move in and breed. By taking away some of their food sources, such as cardboard, old books and rotting shelves, you will reduce the likelihood of silverfish establishing themselves in our home. Also, because they like wet and humid areas, clearing up moisture on surfaces or even dehumidifying your home will also reduce the likelihood of a silverfish infestation. Leaks in pipes should be fixed, and cracks or drains should be sealed in order to ensure that silverfish and other pests cannot enter. It is also recommended to remove wallpaper in areas that have become infected. According to Memorial University, vacuuming and cleaning the house may also help to remove eggs, which females often lay in cracks and crevices, such as near baseboards. In addition to home maintenance, there are other steps that can be taken to prevent silverfish infestation. Some herbs, such as rosemary or costmary sprigs, are well-known silverfish deterrents and can be laid around the areas that silverfish may prefer in an attempt to ward them off. Cucumber peels are also known to deter silverfish, as does camphor.

How to Deal With a Silverfish Infestation

Because they’re small, fast and nocturnal, many people may not even notice silverfish until they have already infested an area. For those who prefer to deal with a silverfish infestation themselves, boric acid can be very effective in killing these pests because the powder is dangerous to them whether they come into contact with it externally or through internal ingestion. Also, basic roach traps and insecticides can also be useful in killing these pests. However, it is usually recommended to use professional assistance because do-it-yourself tactics are often ineffective at clearing out all silverfish, and many of these methods do not get rid of the countless eggs that a silverfish may lay.