3 Things To Know About Cockroaches 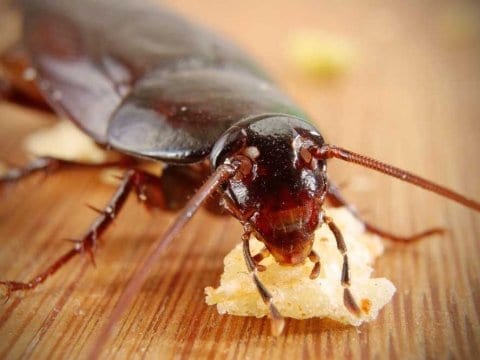 They’re here year round, the American cockroach can be seen making its way around your home, fluttering on walkways at nightfall, and scaring the populace. We’ve collected the three biggest things you may not know about these critters. Of course the #1 thing you should know is that you don’t have to tolerate them. We’re here to help eradicate them; just give us a call!

1. Cockroaches eat pretty much anything. . . even their perished brethren, and they have a sweet tooth and like to eat sugary and starchy things, like desserts, cardboard and book binding glue. Included in their fairly varied eating habit is their love of human garbage.

These unusual dietary preferences lead to their ruining food and contaminating food preparation surfaces. And they affect human well-being in three ways: a) their nasty eating habits, dining on both human excrement and human foods; b) their aimless poop habits; and c) their talent for spewing digestive liquids as they eat! Really endearing, right?

2. Cockroaches carry pathogens of disease. Over 30 species of bacteria have been found on the cuticle and in the gut of roaches, including those of serious medical importance such as E. coli, various strains of Salmonella and Staphylococcus. Cockroaches were also suspected to be the cause of a hepatitis A outbreak in a Los Angeles housing project in the late 1950s.

Though it’s difficult to say what part roaches play in small disease outbreaks, they are capable of harboring antibiotic-resistant bacteria. A 2012 study in Ethiopia looked at cockroaches trapped in a neonatal intensive care unit and found widespread multi-drug resistance among individual species of bacteria residing in the roaches.

3. Cockroaches are filthy. Cockroaches spoil our clean, bleached perception of the world. They are the boldest creepy animals flourishing in our homes and businesses. They need us for the waste and sanctuary we provide, and for that we HATE them. They truly are terrible – they serve as an effective means for disease and filth transmission.